The Four Arenas of Board Conflict 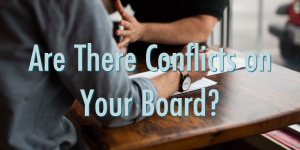 For boards of directors of community organizations, there are typically four arenas in which conflict manifests itself.

Conflict on the board itself arises as a result of differences between individual directors or factions of directors. Camaraderie and friendship is often important for volunteer directors and if the board is not fun at some level, in the face of significant conflict, board members may drift away or resign. Frequently the chair of the board is the source of the conflict, often by virtue of “running the show” or dominating board discussions, or else he/she is guilty of doing nothing to facilitate resolution. Marion Peters Angelica points out that the chair and chief executive (Executive Director) must play a role in resolving board conflict but that the latter is in a very awkward position to do so without appearing to take sides or be manipulating the situation. Beyond providing factual information or providing process advice, the Executive Director is wise to let the board chair, or other board members take responsibility for resolving the conflict.

Boards frequently get drawn into conflicts among staff or volunteers. While the Board might take a role as a result of their own initiative, more often than not the Board will find themselves involved because an individual director or a staff person has done an “end run” around the Executive Director. In situations where a conflict is between a staff person and the Executive Director, the board may need to get involved either to mediate or arbitrate. Boards are increasingly concerned about the legal and/or reputation threats a conflict may have on the organization. Where there is an Executive Director and the conflict is between other staff (or between volunteers), a board would be wise to stay clear, especially if it wants to be seen as affirming the ED’s authority and responsibility. Boards get drawn into staff conflicts because they are often seen as the real authority. A board with a tendency to micro-manage will be drawn into more staff conflicts than a board that sees its role as an arbitrator of last resort. Boards can make staff conflict situations worse, especially when individual directors, or even the chair, take it upon themselves to intervene.

Sometimes the legitimacy of the board and staff will be challenged by the members or groups that are part of the organization’s constituency. Factions amongst the membership can arise whenever a few people become unhappy with how things are being run and believe they or others can do a better job. Directors who show disregard for the organization’s by-laws or constitution open themselves up to an uprising. In such a situation a board is ripe for a “coup”, often involving a raucous Annual General Meeting. Organizations with representative boards are susceptible to these kinds of conflicts because the membership is often already somewhat organized.

How to Manage Better With Conflict 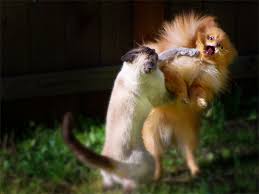 Unfortunately, the media and entertainment industry provide us few examples of well-managed conflict. However, there are ways to channel our inevitable differences into constructive action. Here are some ideas, not in any particular order, for non–profit organizations that want to manage conflict more effectively.

Boards must strive to clarify the roles and responsibilities of individual directors and officers (especially the chairperson) and the board’s role in relation to staff. An annual board orientation session is a logical place for such a discussion. Job descriptions outlining duties and responsibilities are seldom adequate for clarifying roles, especially where board and staff responsibilities overlap such as in determining and working on strategic objectives.

An effective board chair is critical to managing conflict. Such effectiveness comes from clarity about the chair’s role, personal integrity, an understanding of the importance of process and the liberal use of a few proven facilitation techniques.

Formal evaluation processes for the board, executive director and staff members are important mechanisms for direct communication and action that can improve working relationships. Boards should evaluate themselves (with the Executive Director having an opportunity to provide his/her own assessment of the relationship) and should regularly evaluate the Executive Director according to pre-determined criteria. Regular evaluation of staff, by the executive director, if constructively handled, will help avoid staff conflicts.

Whether unionized or not, voluntary organizations that employ staff or regularly utilize volunteers should have a written grievance or complaint procedure that is known to everyone. Such a procedure will outline the steps and decision makers involved in resolving a dispute. Normally such a procedure will include both informal (verbal) and formal (written) steps and time frames. In most cases, such a procedure will designate the Board of Directors as the final decision-maker.

Non-profit organizations ought to have a written code of conduct for directors that set some standards and rules for their relationship with one another, with the Executive Director and with staff. A code of conduct ought to give direction on issues such as confidentiality, conflicts of interests, interactions with staff and speaking with “one voice”.

As uncomfortable as it often is, and as much as we hope that it will go away if we ignore it, it is important to acknowledge conflict directly when it occurs. Boards need to talk about what to do when they have differences. What is necessary for the boardroom to be a safe place to raise difficult issues?

Boards should make time, possibly at orientation, to reflect on, research, and discuss good communication practices. On an individual level, this includes balancing “inquiry” and “advocacy”, checking our assumptions, being aware of own filters and separating impact from intent. Directors can be more effective if each person put into practice the principle that they should ‘seek first to understand, and then to be understood.’ Starting a “difficult conversation” by describing what happened rather than our interpretation of what happened can help prevent people from becoming defensive.

It can often be helpful when there are different views on what should happen, to discuss the resolution of a conflict as a negotiation. In this frame, people can be asked to set their positions aside, assert their views, seek to understand those of others, work with underlying interests (common and different), and look for solutions that meet everyone’s interests.

Both boards and staff can do more to acknowledge the hard work that is involved in expressing and working through important issues. We can all show genuine appreciation for openness and risk-taking, “Pats on the back” are often welcome. A bottle of champagne, a case of beer or a team dinner can be useful ways of drawing attention to success in managing conflict.

It is well known that men and women, and people of different cultures, bring different perspectives and skills to managing conflict. If a conflict suffers from cultural intransigence, boards should look inward or outward for some alternative approaches.

A third party is often very valuable in helping to resolving conflict. This can be a professional or a trusted friend outside of the organization. The integrity and skills of the person should always take precedence over their position; even a representative of a funder, if they are the right person, could facilitate a resolution. The board should be clear if it wants the resolution mediated with the help of a facilitator (a negotiated resolution) or someone else to hear the arguments on all sides and decides (an arbitrated settlement).

If you need help, contact us at [email protected]